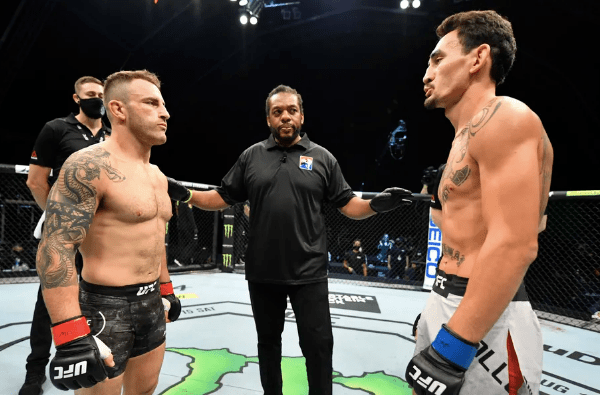 UFC 276 Odds: Alexander Volkanovski -200 favorite, Max Holloway +165 underdog.Volkanovski won the first two bouts but the oddsmakers still have the trilogy as a close competition.Will Holloway finally have what it takes to hand Volkanovski to reclaim the featherweight strap?

Oddsmakers at BetMGM initially had Volkanovski vs Holloway 3 odds extremely close when they opened. It now seems to of shifted even further in the favor of the champ. Alexander “The Great” is currently a -200 betting favorite, bet $200 to net $100 on the champ retaining the belt. For Max Holloway, this will be his last shot at Volkanovski, he’s currently a +165 underdog, wager $100 to net $165.

For all the latest UFC 276 odds and a recommended sportsbook, check out our list of UFC betting sites.

Betting on Volkanovski vs Holloway Trilogy

Max Holloway is coming off a five-round win over Yair Rodriguez, now he steps back into a championship fight against a durable Volkanovski, who’s defended the strap twice at 145 pounds.

Big stakes for both fighters in this UFC 272 headliner. If Holloway can pick up a win here he’ll cement himself as the top dog once again at featherweight. If he losses he’ll go down as the second fighter in UFC history to lose to the same person twice, alongside fellow Hawaiian BJ Penn.

Volkanovski and Holloway have fought ten rounds and too many, there is still a fight to settle. They both know each other’s fight styles and what to expect, which should make for an exciting tactical bout.

Comparing both fighters’ progression since they last fought, you could argue that Volkanovski has improved more so than Holloway. At UFC 266 Volkanovski put on a clinical performance defeating Brian Ortega in a five-round war. Meanwhile, Holloway fought twice in 2021, both wins by the decision but it was his most recent win over Yair Rodríguez, that should some defensive chinks in Holloway’s armor that you can not give up against Volkanovski in the trilogy.

Volkanovski certainly has a clear advantage over Holloway entering this trilogy. Holloway will need to hurt Volkanovski early in the fight similar to what he did in the second bout. “Blessed” should try and catch Volkanovski with a head kick and uppercuts which would be a huge TKO/KO for the former champ.

Expect Volkanovski to throw lots of feints and jabs, while working the legs to limit his movement of Holloway. In terms of betting value picking Volkanovski to win by decision against is a smart bet.

Stay tuned to Betting Insider Journal, for a predictions piece closer to the fight. In the meantime, check out more of our MMA odds, news, and predictions for all major UFC events.