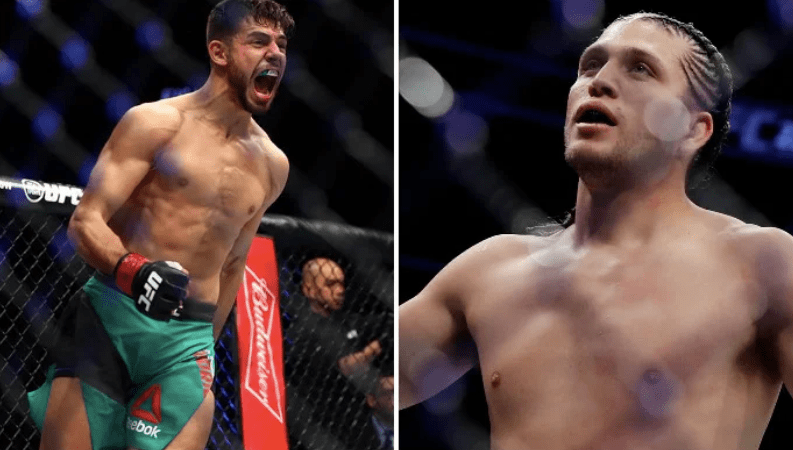 UFC Long Island odds are favoring Brian Ortega -160 over Yair Rodriguez +135.Yair will have a two-inch reach and striking defense advantage over Ortega.My betting prediction is Brian Ortega to have his hand raised at UFC long island.

On July 16th the UFC will visit the UBS arena, Long Island, New York. Headlining the event will be two prime featherweight contenders in Brian “T-City” Ortega taking the Yair “El Pantera” Rodriguez. This is an important match-up for the future of the 145-pound division as the champion Alexander Volkovanski could move up to 155, leaving the belt vacant for the winner to possibly challenge for next.

Online sportsbooks have the latest UFC Long Island odds ready to wager on. Currently, Brian Ortega is a modest betting favorite -160 over Yair Rodriguez +135. Wagering $160 on “T-City” would net a $100 profit. While the always dangerous Rodriguez offers value with $100 down netting $135 with a win over Ortega.

This will be the first time in seven UFC fights that Brian Ortega will be the betting underdog. Although, he’s 4-2 in those last six fights the oddsmakers have always had some doubts about the former RFA champions striking defense.

For the latest UFC odds check out BetMGM Sportsbook, if you are looking for an alternative, these sports betting apps are a great place to start. UFC on ABC 3 is also set to feature Michelle Waterson taking on Amanda Lemos, in the co-main.

Yair Rodriguez is coming off a five-round war with Max Holloway, a fight that Rodriguez was completely overlooked by the oddsmakers. Rodriguez had moments of success in the fight and easily one 1-2 rounds, including the final round. That has cemented Rodriguez as a top contender again at 145-pounds, but not enough to convince us that he has a clear advantage over Brian Ortega.

Rodriguez’s only other loss in the UFC was to Frankie Edgar at UFC 211 in 2017. “El Pantera” has made a name for himself as one of the most diverse strikers in the UFC. He will have a 2-inch reach advantage over Ortega, which could become a problem for “T-City” if Rodriguez manages his distance and makes this a striking exhibition.

When it comes to strikes absorbed per minute, Rodriguez averages 4.09 vs Ortega at 6.69. Given Ortega’s last fight against Volkanovski increased that strike infliction rate tenfold. Volkanovski landed 214 significant strikes compared to Ortega’s 88 at UFC 266.

Ortega’s fighting style has always been taken one to give one back, ever since his early UFC days when he would take severe punishments and come back in the last round and win by submission.

Overall Brian Ortega has more ways to win this fight than Yair. His grabbling ability and submissions are the best in the division and his striking has evolved immensely over these past few years, which could even surprise Yair if this fight turns into a back-and-forth war.