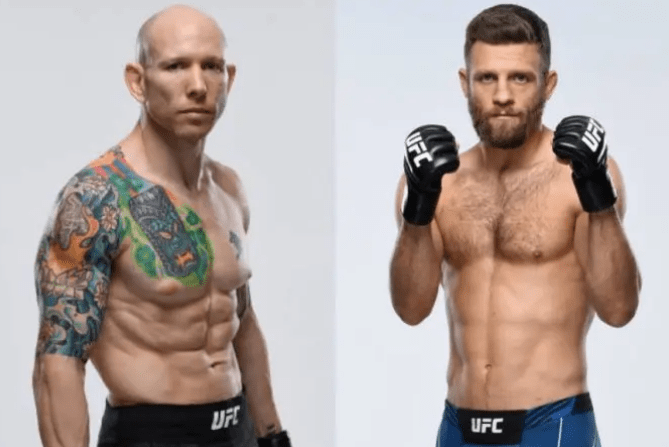 The latest UFC Austin odds are in favor of Calvin Kattar -225 to defeat Josh Emmet as a +185 underdog.We give our betting prediction for Kattar vs Emmet below.

UFC on ESPN 37 is headed to Austin on June 18th headlined by Calvin Kattar vs Josh Emmet. This featherweight contender clash will see Kattar who is ranked No. 4 with Emmet at No. 7 in the 145-pound rankings. The winner here could well be in the title picture if they can pull off an eye-catching win.

UFC odds are in favor of Calvin Kattar -225 as per BetMGM Sportsbook. Giving ‘The Boston Finisher’ an implied win probability of 69.2% to pick up his second UFC win in a row. Josh Emmet at +185 offers some betting value, coming off four-straight wins you can bet $100 on ‘The Fighting Falmer’ to net $185 profit.

Calvin Kattar has a 7-3 UFC record and 4 of those wins come by finish. His notable wins are over Ricardo Lamas, Dan Ige, and most recently Giga Chikazde in the first UFC fight card of 2022. Kattar was a +200 underdog against Chikazde, with many UFC online betting sites overlooking ‘The Boston Finisher’ after his tough loss to Max Holloway in January 2021.

Kattar has never been finished by TKO/KO and has only one submission on his record. He’s one of the most durable fighters at 145 pounds and Josh Emmet will have his hands full trying to put Kattar away.

Calvin Kattar says fight vs. Josh Emmett will be ‘one hell of a main event’ | ESPN MMA

Josh Emmet is a BJJ purple belt and has been in the UFC since 2016, with a UFC record of 8-2. Emmet’s one notable loss was by KO to Jeremy Stephens, during Stephen’s resurgence run back in 2018. Since then Emmet has bounced back and four straight wins in a row.

All against solid opponents including Michael Johnson, Mirsad Bektić, Shane Burgos, and Dan Ige. 3 out of these last four fights Emmet was the betting underdog, which shows us he is constantly defying the odds and makes a solid underdog pick even against Calvin Kattar. In terms of activity, Emmet has had some layoffs and injuries in-between fights, similar to Kattar but he seems to be the fresher opponent who is coming from a recent win and is 4 years younger than Emmet.

According to UFC stats for this fight, Emmet only has 3 stoppage wins in the UFC. However, don’t let the numbers distract you from the real punching power Emmet can land pack once the right moment presents itself. When it comes to trading on the feet, Kattar will have a 2-inch reach advantage and I expect his crisp boxing to jab away at Emmet over the course of this fight. Knowing that Emmet will have to close the distance, he will leave an opening where Kattar will try and counter and finish Emmet.

What’s Next for the Winner of Kattar vs Emmet?

An impressive win here could really project Kattar to fight the winner of Volkanovski vs Holloway 3. For Josh Emmet, he might need another win under his belt and that could be the winner of Ortega vs Rodriguez that’s on tap for this summer. UFC on ESPN 37 will also feature Donald “Cowboy” Cerrone takes on Joe Lauzon.