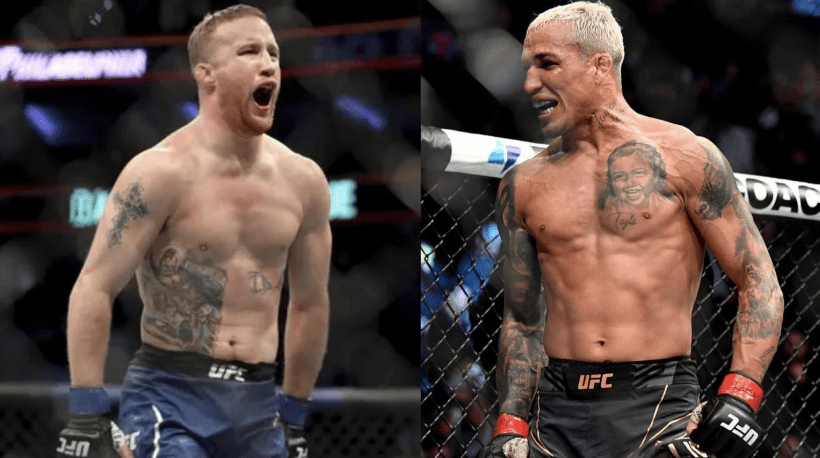 The fight that everyone was waiting for his finally announced. Lightweight champion Charles Oliveira is set to make his second title defense against Justin Gaethje. This is a very dangerous match-up that is not expected to go the distance. We review the opening UFC 274 odds for Oliveira vs Gaethje below.

The current lightweight champ Charles “Do Bronx” Oliveira opened as a -175 favorite to defeat Justin Gaethje. You can bet $175 on Oliveira keeping is belt to net $100. For “The Highlight” Gaethje this will be his second shot at UFC gold. Check out BetMGM Sportsbook for the latest UFC 274 odds.

As a +145 underdog, you can wager $100 to net $145 on Gaethje becoming the new UFC lightweight champion at UFC 274. If you are looking for a sportsbook app near you, check out our list of UFC betting sites.

Betting on Oliveira vs Gaethje at UFC 274

Oliveira is starting to get the recognition he deserves from the oddsmakers. He’s been an underdog for the best part of his UFC career. Against Tony Ferguson he was a +160 underdog, then again in his title bout against Dustin Poirier he was a +120 underdog come fight night at UFC 269.

Oliveira has proved he doesn’t quit anymore, when the going gets tough. Instead he bites down and throws everything he’s got into unorthodox submissions and quick strikes that have knock down past opponents such as Michael Chandler. “Do Bronx” is now on a 10 fight winning streak and is looking to extend that with another huge win at UFC 274.

Gaethje has gone 5-1 in his past six fights with his only loss during that time coming to former UFC lightweight champion Khabib Nurmagomedov. In many of his early UFC fights he was a pick em’, including his opening odds against Poirier and James Vick. Since then Gaethje has cemented himself as a slight favorite heading into most bouts. He’s currently 5-1 in his last 6 fights, with the only recent loss coming to Khabib, where he was a +285 underdog against “The Eagle” for his first UFC title shot.

Given the volatility of both of these fighters, the odds could be even closer. The fact that Gaethje tends to give his back in fights and this is not advisable against Oliveira. For the champ Oliveira he will have to wary of standing and trading with Gaethje, he’s arguable the better striker and could finish Oliveira on the feet.

Justin’s last fight at UFC 268 was a fight of year contender. Yet the 155-pound contender seen it differently.

“To be completely honest with you, I feel like that was kind of a boring fight when I was in there,” Gaethje told BT Sport. “Yeah, it just makes no sense. It’s the first time I’ve ever wanted to win more than to knock somebody out. So yeah, it was not good. I didn’t like it. I want to go back to just wanting to hurt somebody and finish them. But now that I have won, I got my title shot, I can go back to how it should be.”

That should tell us enough of what version to expect at UFC 274. What’s your early betting prediction for Oliveira vs Gaethje? Comment below.