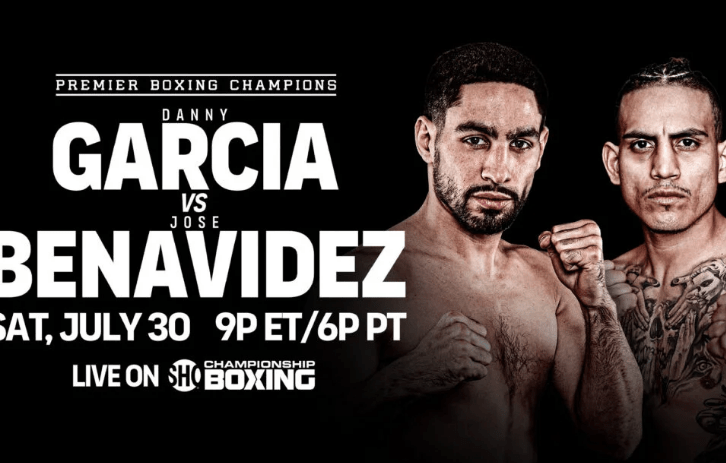 Boxing odds for Danny Garcia -850 to defeat Jose Benavidez Jr as a +510 underdog.One betting prop we love is Garcia to win by decisionFind out why Garcia is predicted to pull off his first win at super welterweight on July 30.

The latest boxing odds as per Caesars Sportsbook are favoring Danny Garcia -850. Giving an implied win probability of 89.4% to defeat Jose Benavidez, who is a +510 underdog. Betting on Benavidez to win as a big underdog here would net $510 off a $100 wager. Visit these best-rated sports betting apps prior to betting on Garcia vs Benavidez.

To unlock a $1,500 risk-free bet use this Caesars Sportsbook promo code.

Betting Prediction for Garcia vs Benavidez

Danny Garcia is now 34 years old and is coming off a competitive but decisive loss to Errol Spence Jr. His career has seen him hold multiple world championships in two weight classes, including the unified WBA, WBC, Ring magazine, and lineal light welterweight titles.

There has been a significant difference in the Garcia we saw him fight at 140 to 147 over the years. That will remain the same as he moves up to 154-pounds, a weight class I don’t see the former two-time champ thriving in.

Jose Benavidez Jr on the other hand hasn’t had as definitive of a career as Garcia. Jose the older brother of David Benavidez, is a former WBA interim light welterweight champion, making his pro debut in 2010 and promptly finished all nine of his first opponents within three rounds. The ceiling was set high for Benavidez, and when it came time to put his undefeated record on the line against Terrance Crawford in 2018. Benavidez put on a strong performance but ultimately was KO’d in the final round.

What makes the situation worse, is Benavidez remained inactive for 3 years after this. Returning in 2021 to face Francisco Emanuel Torres, which resulted in a draw. Many believe Benavidez has reached his full potential prior to the Crawford fight and that by taking on even an aging Danny Garcia he will find it difficult to pull off the victory. I expect Benavidez to start to play it safe after a number of rounds, which means we could be looking at a decision here for Garcia.

My betting prediction is that Benavidez holds his own for the opening rounds. Making this fight competitive enough that it will go past the 6th round at least. I expect Garcia’s elite left hook to be there, but due to inactivity, his timing could be of which is essential for a big counterpuncher.

Danny Garcia returns to the ring at 154 lbs against Jose Benavidez Jr this Saturday.

He’s fought some tough opponents and had some very good fights but what’s your favourite Danny Garcia fight?

“I would definitely want to revisit the Spence fight at 154 pounds,” Garcia said during an open workout at DSG Boxing Gym in Philadelphia. “We have history already. Once I start looking good at 154, there’s going to be a lot of great fights for me.”

“2020 was a good and bad year for me,” Garcia said. “I fought twice and made a lot of money, but at the same time, there was the pandemic. It was a tough year for me outside of the ring. It was stressful for everybody. I just needed a break. I was tired. I trained hard at the beginning of the year and then we went through the pandemic.

“I had to wake myself up to train hard again for one of the biggest fights of my career. It just took a mental toll on me. I was mentally tired. I banged it out with Spence. He got the decision, but I was still able to go in there and scrap for 12 rounds. I knew if I just took a break and came back, nobody could touch me.”