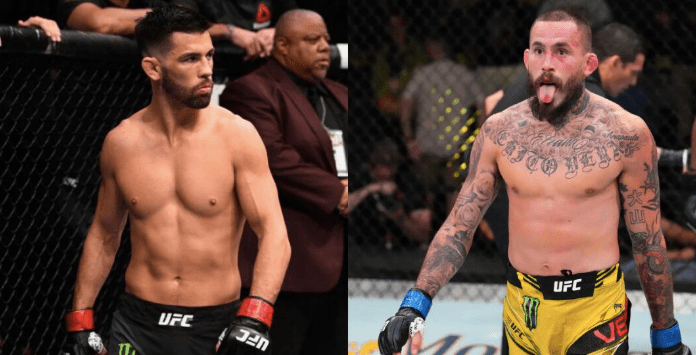 Marlon Vera is a -190 betting favorite to defeat Dominick Cruz on Aug. 13 at UFC San Diego.Dominick Cruz is on a two-fight win streak with his last win over Pedro Munhoz at UFC 269.We review the latest Cruz vs Vera odds with a fight prediction below.

Dominick Cruz and Marlon Vera are set to headline UFC San Diego on August 13. Cruz is ranked no.8, while Vera is no.5 in the UFC’s bantamweight rankings. The winner here could easily be one more fight away from a title shot. This bantamweight fight could be seen as a passing of the torch, or maybe the last stepping stone for Cruz to make another championship run at 135-pounds.

Various UFC betting sites are going Marlon Vera a solid 65.5% chance of defeating former two-time bantamweight champion, Dominick Cruz. Betting on Vera as a firm favorite here, means $190 down would net $100 profit. Cruz as an underdog gets up $160 with a $100 bet. Check out BetMGM sportsbook for the latest UFC odds and betting lines.

Vera (19-7-1), has 7 wins by KO/TKO, and 8 wins via submission which tells he fights to finish his opponents. Vera is known for pushing the pace in fights, which is something Cruz is very familiar with too given his constant movement and feints.

I expect Vera to try and break Cruz’s rhythm as much as possible. By throwing the front kick and utilizing his grappling if Cruz comes within reach to hook in the clinch and deliver some swift knees.

At 37 years of age, Cruz has 16 decision wins and is a super experienced veteran now. While Cruz possessed a real enigma aura prior to losing to Cody Garbrant in 2016. After only losing once since the Cody fight, to Henry Cejudo the following fight. Cruz returned in 2021 and picked up wins over Pedro Munhoz and Casey Kenny. Shows us how he manages to frustrate the newer generation of UFC fighters.

Cruz still has excellent footwork and I expect this to still be something Vera will have issues figuring out. His ability to throw shots from overhand and liner angles are the ones that hurt his opponents more.

Much of this breakdown depends on what version of Dominick Cruz shows up at UFC San Diego. Will we see “The Dominator” fizzle out and age overnight? It’s possible, and in that case, Vera is in his prime to stop Cruz in his tracks and go for the 135-pound title.

In terms of betting value though, Cruz at +160 on DraftKings Sportsbook is a solid underdog wager. We might see a situation here where Cruz’s wrestling makes the difference here that can catch Vera by surprise.

That’s what makes this fight so exciting is the contrasting styles but also similar in terms of the pressure and pace they fight at. “Chitto” is hungry that’s for sure, but Cruz has extreme fight IQ and always had a chip on his shoulder, and I’m giving him the slight edge over Vera in this upcoming UFC San Diego headliner.

Nobody Cares About Vera Says Cruz

“When I look at Vera, all the things he says, I don’t think he really means it,” Cruz told The Schmo. “He does, but he just wants to be heard. He’s a guy that just wants people to hear him because look at what he did to Sean O’Malley and nobody said a thing about him.

Nobody cares that he won that fight. He’s just tired of being ignored because people don’t really care that much about him. When he wins, nobody says anything. So, I think that he’s just trying to be heard so he’s saying anything he can, really angry, he’s got a lot of demons, I guess, that he’s dealing with. I don’t know.

“But when it comes down to it, when you see him win after that fight, I’ve seen him in the back, we’ve worked together, he’s cool. I have no beef with this guy so I’m very neutral about it. He’s obviously very angry about something. I think he just wants to be heard and for people to care about him.”