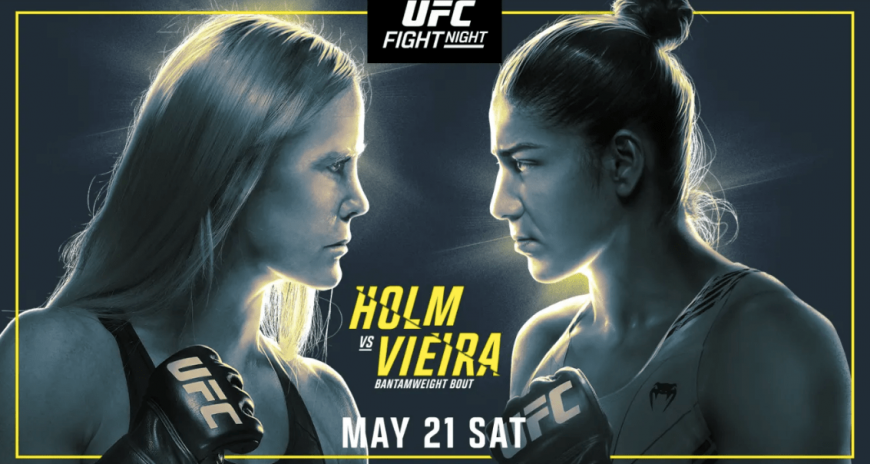 Holly Holm is currently a -210 betting favorite to defeat Ketlen Vieira as a +176 underdog.This will be Holm’s first UFC fight since 2020 when she won by decision against Irene Aldana.We give our fight prediction for Holm vs Vieira below.

Holly Holm is set to return to action on Saturday, May 21 at UFC APEX in Las Vegas, headlining a UFC Fight Night against #6 ranked bantamweight Ketlen Vieria. We review the latest Holm vs Vieria odds for this bantamweight contender fight and give an early fight prediction.

Former bantamweight champion Holly Holm opened as a -210 betting favorite to defeat Ketlen Vieira, who’s a +176 underdog. Holm’s win probability is 67.7% with a $210 bet, netting $100, profit. Vieria is coming off a win over former champ Miesha Tate and has a real chance of upsetting the odds here.

This makes Holm’s first time in the Octagon since June 2020, when she defeated Irene Aldana by decision. Holm is currently on a fight win streak and his still ranked #2 in the bantamweight divison. A knee injury forced Holm to withdraw from a matchup against Aspen Ladd this past October. She was replaced by Norma Dumont, who defeated Ladd via decision in a major upset.

Ketlen Vieira who’s 10 years younger than Holm, is slowly making championship for herself at bantamweight. The Brazilian is black belt in Brazilian Jiu-Jitsu and Judo, she holds impressive wins over Miesha Tate, Sara McMann and Cat Zingano.

Vieira is now in a perfect position to pick up a win over Holm and secure her spot as the rightful #1 contender against Julianna Peña. It was Peña who became on of the biggest underdogs in a UFC championship fight to win over Amanda Nunes at UFC 269.

We know that Holly Holm remains one of the best strikers in the UFC. What’s underrated about Vieira is her ability to let her hands go, which could be a problem for Holm if she manages to get inside of range.

Holly Holm will have the slight 1-inch reach advantage over Vieira The stats show that Vieira lands over double the takedowns with 1.71 TDs completed per 15 minutes. She will likely want to put Holm’s 76% TD defense to the test.

This will be a true coming of age fight for Vieira and for Holm its a challange to see if she can get one more crack at UFC gold with a win over Vieira. I’m picking Holly Holm to edge out a decision win over Ketlen Vieira at UFC Fight Night 206.

Vieira up for the Challange

In an interview with Ag Fight, Vieira praised Holm’s striking skills, but knows her opponent is not a unidimensional fighter anymore. Although Ketlen is more known for her grappling skills, the Brazilian points out that she needs to be ready for anything against an athlete such as the ‘Preacher’s Daughter.’

“I’m moved by challenges,” Vieira said. “I like that, it keeps me focused, hungry, I know I can’t make mistakes. Holly has a really solid striking game, she’s a big name in boxing and kickboxing and I believe I have a good grappling game. She’s very experienced. Sometimes she feels like things are difficult on the feet and she tries to grapple you. She does MMA really well. I’m sure she expects me to take her down, so I need to be ready to impose my gameplan and I’ve been practicing quite a few.

“According to the rankings, I could (get a title shot with a win over Holm),” Vieira said. “If I beat the number-two athlete and number one is already fighting for the title, then there could be a few changes and I’d end up in Holm’s place. If I beat a top fighter like Holly, a former champion who has fought in different divisions, I think it puts me on the verge of a title shot.”

For more MMA news stay tuned to Betting Insider Journal. We have you covered from NY online sportsbooks to Ontario betting apps and more. Drop a comment below on who you think will win – Holm or Vieira?