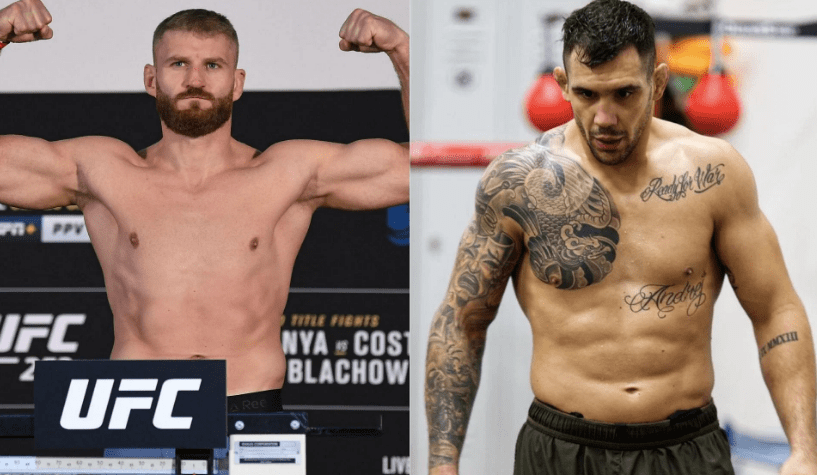 A huge light heavyweight #1 contender bout is in the works for May 14 UFC event. Former l85 pound champion Jan Blachowicz will return to take on #3 ranked Aleksandar Rakic. We review the opening UFC odds for Blachowicz vs Rakic and give an early betting pick below.

According to BetMGM Sportsbook, Jan Blachowicz is currently a +140 underdog against Aleksandar Rakic as a -160 favorite. You can bet $100 on Blachowicz at these current odds to net $140 if he wins. While Ratic opened at even money, he now has a 61.5% win probability.

For a list of more online sportsbooks that offer competitive UFC odds, check out our list of UFC betting sites.

Betting on Blachowicz vs Ratic

Everything went wrong for Poland’s Jan Blachowicz at UFC 268. The UFC veteran lost to fellow veteran Glover Texeira, who was simply the better man on the night.

Blachowicz entered his second title defense as a -300 betting favorite, with many disregarding Glover’s chances against ‘Polish Power. Prior to that Blachowicz picked up an impressive win over Israel Adesanya, who attempted to become the UFC’s next double champ but was stopped in his tracks by Jan.

As Blachowicz said this is one step forward and two steps back. This is true about how much of his UFC career has played out. Many of Blachowicz’s opponents on the rise to becoming UFC champion stood and traded with him, whereas Glover’s approach was varied and he had much success on the ground. That shouldn’t be much of a worry for Blachowicz when he takes on Austria’s Rakic, who is known for his explosive stand-up style.

Aleksandar Rakic on how he would defeat Jan Blachowicz 👊

Aleksandar Rakic’s rise has been steady in the UFC. His only UFC loss was by split decision to Volkan Oezdemir. He has dismantled Devin Clarke and Jimi Manuwa within the first round and in his last two fights he won by decision. Rakic has been a solid betting favorite entering his past few fights, I expect some late money to go on Ratic who will end up being the betting favorite by the time this fight rolls around.

Stylistically Rakic had problems getting going against Thiago Santos and he knows it. That happens sometimes in MMA, two fighters will cancel each other out. My early betting pick here is Blachowicz as an underdog offers real value. His experience and fight IQ is underrated and should be enough to deal with Rakic.

Where Does Anthony Smith Fit into this?

A knee injury prevented Anthony Smith from taking on Rakic. He remained left out of the currently light heavyweight title picture.

“I’m afraid because I’m indifferent [about who I fight next], I’m going to get left out in the cold,” Smith said during an appearance on The Fighter vs. The Writer. “It would be a real sh*tty deal if Jiri Prochazka gets the title shot and then Rakic and Blachowicz fight each other and that kind of leaves me sitting out with my hands out.”

What’s your early fight prediction for Blachowicz or Ratic?