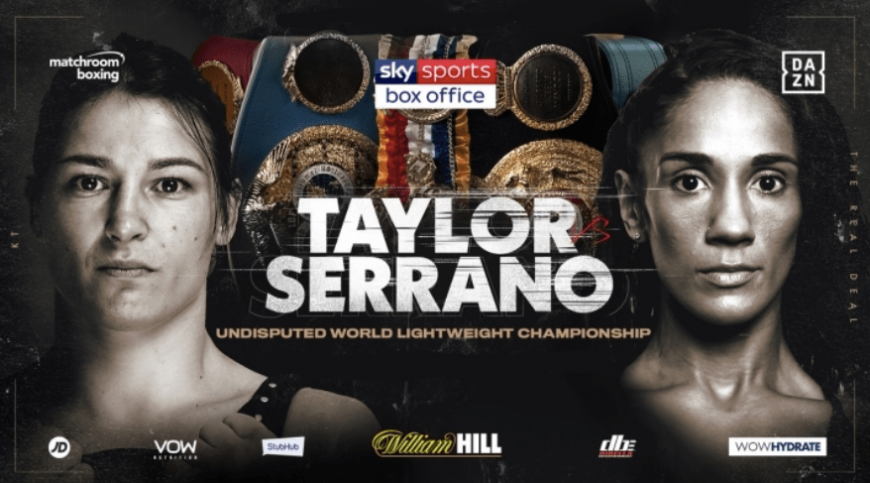 Odds are favoring Katie Taylor -144 to defeat Amanda Serrano as a +112 underdog.The undefeated Katie Taylor won a decision over Jennifer Han in September.Amanda Serrano is coming off two impressive wins in 2021, to extend her record to 41-1-1.

The biggest fight in women’s boxing history is set for April 30. at Madison Square Garden, NY. Katie Taylor the undefeated Irish boxer is on tap to face the Puerto Rican sensation, Amanda Serrano. The matchmakers are looking to Madison Square Garden, New York to host this blockbuster fight. With this fight in the works, we take a look at the opening odds for Taylor vs Serrano below.

The current betting odds are favoring Katie Taylor -144 on some online sports betting sites. That’s an implied win probability of 59% for Taylor, with a $144 wager netting you $100. The slight underdog will be Serrano currently +112, some real betting value here on “The Real Deal” here with a $100 bet making $112 in profit. For the latest odds on Taylor vs Serrano, head over to BetMGM Sportsbook.

For a more in-depth preview of this upcoming fight, check out our Taylor vs Serrano predictions.

“Amanda has nothing that worries me!” – Taylor locked in for career defining clash with Serrano

Betting on Taylor vs Serrano

When these odds initially opened Taylor was a firm favorite averaging -260 on some sportsbooks. Since then the gap has narrowed in the betting line, making this a more even fight. We’ve seen Taylor win some close decisions in the past from Delfine Persoon and also battle adversity too.

Taking on Serrano in 2022 will be Taylor’s toughest challenge to date, with the Irish hero turning 36 next July. The advantage Taylor is going into this fight is her punch accumulation, reflexes, and grit to get past a more powerful puncher like Serrano.

Serrano has been at the top of women’s boxing in the US since 2016, winning the Female Boxer of the Year Award then and in 2018. At 32 now is the time for Serrano to unify the belts at 126lbs. Over Serrano’s past few fights she has been a perennial betting favorite, from -500 against Heather Hardy to -2000 in her last fight to Yamileth Mercado.

The smart bet here would be to wait and see how the odds play out once the fight draws closer. I foresee the odds closing with Katie around -150 and at those odds, she is my earl betting pick to defeat Amanda Serrano by decision at MSG. Rematch anyone?

“Katie hasn’t fought anyone like me!” – Amanda Serrano links up with Jake Paul for Taylor showdown

Taylor vs Serrano – equality as its meant to be

“Women have been boxing since the early 1900s but it wasn’t until 1999 that they were able to compete professionally. Twenty-three years later, here we are with one of the biggest fights ever, headlined by two women at Madison Square Garden.”

It will be the sixth time Irish fighter Taylor has put her belts on the line since beating Delfine Persoon to claim them in June 2019.

Taylor and Serrano are No. 1 and No. 2 on the ESPN Women’s pound-for-pound rankings respectively. pic.twitter.com/ZCT878MrDN

Eddie Hearn has now secured the women’s version of Mayweather vs Pacquiao, while both boxers are in their prime. Hearn has done more women’s boxing these past five years than any major network has over the past three decades.

In a recent interview with BoxingScene: “I think Katie Taylor fights again in December and then I think she has to fight Amanda Serrano,” Eddie Hearn, Taylor’s career-long promoter stated on DAZN upon the conclusion of Saturday’s telecast. “It’s not her fault that fight hasn’t been made. It’s a mixture of many things but that’s the past. The future… I think we have to.”

“I think Amanda Serrano fancies that fight, I think she’s done a fantastic job to raise her profile,” admits Hearn. “She brings tremendous value in the fight. She can be rewarded for that value.

“I think we can headline that fight at Madison Square Garden (in New York City). By far the biggest fight in women’s boxing. We have to do that fight. We have to make that fight because it will be a piece missing in a wonderful career.”

Taylor vs Serrano is a high-risk, high-reward fight that will ignite the winner into the greatest of all-time debate. in the meantime, Taylor is expected to take one more fight before the year is out to stay busy. For more boxing odds, news and coverage, check out our boxing section.