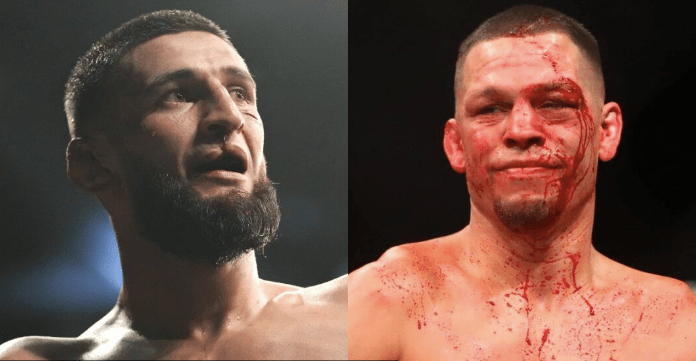 Two fan favorites are set to collide at UFC 279. Nate Diaz will return to action against Smesh Brotha Khamzat Chimaev, in a welterweight bout that takes place Sept. 10 at T-Mobile Arena in Las Vegas.

Diaz and Chimaev have been entwined to fight for some time, with Diaz also wanted out of the UFC, he now gets one of the most dangerous opponents in Khamzat. We review the opening Chimaev vs Diaz odds with an early betting pick to follow.

“Borz” Chimaev opens as a massive betting favorite -1250 over Nate Diaz for their UFC 279 headlining fight. That’s an implied win probability of 92.6% for Chimaev increasing his undefeated MMA record to 12-0.

Even the durability of Nate Diaz is being overlooked by all online sportsbooks. The Stockton southpaw is a +800 underdog. Meaning a $100 wager on Nate could net you $800 at UFC 279. Check out BetMGM Sportsbook for the latest UFC odds.

Betting on Chimaev vs Diaz

Nate Diaz always comes to fight and is hard to put away. In his last bout against Leon Edwards, who is challenging for the welterweight title next. Nate opened as a +220 underdog and closed to +380. The fight was predominately in Edward’s favor, but the momentum shifted in the last round with Diaz’s flurry almost stopping “Rocky”.

Chimaev’s recent UFC odds, tell us he’s been a heavy betting favorite since his first UFC fight in July 2020. Where “Borz” picked up a 2nd round submission win over John Philips as a -500 favorite. From there, Chimaev started to climb the ladder and looked simply invincible, steaming the competition with three 1st round finishes.

Chimaev will need to stick to the game plan this time against Diaz. As it went out the window against Burns, who clearly tested “Borz” fight IQ and cardio in the three-round thriller at UFC 273.

Where Diaz could shine here is if he decides to walk Chimaev down and wear on him over the course of the fight. I think the longer this fight goes on, especially into the championship rounds it could benefit Diaz more. Nate has a slick ground game and if Chimaev gets fatigued and this fight goes to the ground, we could be looking at a huge upset.

This will be Diaz’s fourth time headlining a UFC PPV card and the first time for Chimaev. After Chimaev’s last performance against Gilbert Burns, which garnered an early ‘Fight of the Year’ nod, we can only imagine the PPV numbers this fan-friendly match-up will attract.

Khamzat Chimaev (@KChimaev) provided this comment about the fight to ESPN. Translated from Swedish by his representative Majdi Shammas.

“I am going to handle Nate Diaz’s funeral with the UFC.”

Diaz has vast UFC experience from winning the Ultimate Fighter 5 in 2007, to capturing an impressive win over Conor McGregor in 2016 and never backing down to any challenge thrown his way. This time I do believe he may have bitten off more than he can chew, it was only two fights ago that Jorge Masvidal won by doctor stoppage for the “BMF” belt.

Nate’s scar tissue has been a reoccurring issue over the years, and he has typically never fared well against bigger opponents, such as Rory MacDonald. Chimaev is a dominant welterweight and has some of the best wrestling in the UFC, which he may look to return to using against Diaz to get him in more vulnerable positions to attack.

At -1250 though, it’s best to wait for the UFC betting props on Chimaev vs Diaz. To see what Chimaev is by TKO and even price Diaz’s odds to win by submission.