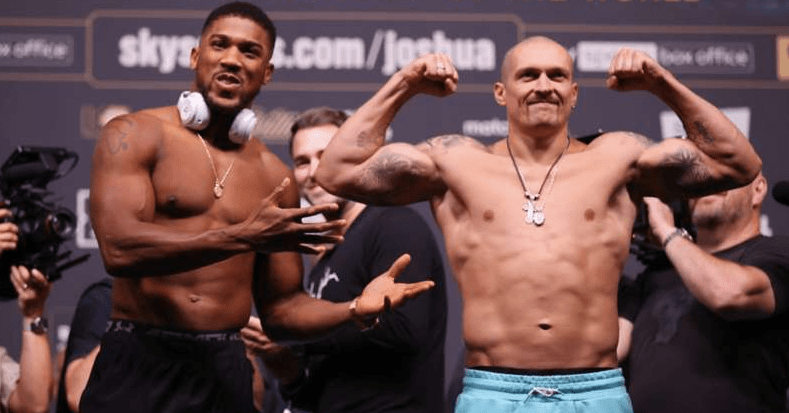 Boxing odds for the upcomng rematch between Usyk vs Joshua 2 are live.Usyk scored a unanimous decision win over Joshua to win four of his heavyweight titles.Can Joshua make the needed adjustments to win against the undefeated Ukrainian?

Anthony Joshua has already ‘activated’ his rematch clause against Oleksandr Usyk after his defeat to the Ukrainian in September. The newly crowned heavyweight champion Usyk is expected to rematch Joshua on July 23rd in Abu Dhabi. With that opening boxing odds already live the oddsmakers might have it closer than many expect.

According to the opening Usyk vs Joshua 2 odds on FanDuel sportsbook, Usyk has an implied win probability of 69.23% for defeating Joshua a second time. You can wager $225 on “The Cat” to net $100. If you like AJ’s odds of winning yet another rematch, then you can bet $100 to win $172. Check out these boxing betting sites for the latest Joshua vs Usyk odds.

Bettors can expect to see Usyk’s favorite betting odds grow as the fight draws nearer. From a -225 to possibly -300 or more come fight night. Usyk’s victory over Joshua has cemented his spot as one of the best P4P boxers in the world today, arguably ahead of Canelo Alvarez.

Can Joshua Solve The Usyk Puzzle?

Over the course of Joshua vs Usyk at Tottenham Hotspur Stadium. We saw Usyk absorb Joshua’s best power punches and remain perfectly composed. Usyk was defensively responsible yet still managed to be the aggressor in this fight.

As the fight went on Joshua made some subtle adjustments from rounds 4-6. However, he didn’t gain much momentum to deal with Usyk’s unpredictable rhythm, which left AJ out of answers by the championship rounds. AJ tried to outbox one of the most technical boxers in boxing, and it didn’t go his way. As the fight was drawing to an end Usyk was close to finishing Joshua.

Over the years in heavyweight boxing, we’ve seen different body types and styles compete at the top. For the majority of AJ’s bouts, he’s relied on power punching to wipe out the division. That was until he lost to Andy Ruiz and won the rematch fighting more like a technically defensive-minded boxer.

Wladimir Klitschko on if Anthony Joshua can bounce back from Oleksandr Usyk defeat: “I lost two fights within a year, to bounce back and become one of the longest reigning champions. AJ still has his time, absolutely. It’s all about how to overcome this challenge.” [@SkySports]

This approach doesn’t work against Usyk and in hindsight, a power puncher with his feet planted might be even worse. Still, a change in-game plan will have to be crafted in AJ’s camp, if he can start fast and hurt Usyk early then we could be in for a trilogy.

While the oddsmakers are understandably setting Joshua as the underdog. It still should be a competitive rematch and another glorious display of the sweet science at its best.

Thanks for sending love & checking in. Don’t worry about me. My spirit is strong! pic.twitter.com/waX0gnXgaE

While many believed Joshua would defeat Usyk and would eventually face Tyson Fury. Usyk has put an end to that but has openly accepted Joshua’s rematch clause.

Usyk’s team hopes that they will be able to host the second bout in Kiev, Ukraine, in February. Usyk appeared at a press conference with his promoter Alexander Krassyuk, who announced the plans..

“The rematch was specified in the contract,” Krassyuk said . “It has already been activated in principle, from the side of Joshua.

“So I remember when we discussed with Oleksandr the issue of rematch, he was delighted and said ‘Wow, cool, I will beat [Anthony] twice.’”

While Eddie Hearn is not keen on a trip to Eastern Europe, Usyk defended the choice. That all being said, the possibility of Fury vs Usyk down the road to unifying the heavyweight division is a mouth-watering prospect.

Will We See An Undisputed Heavyweight Anytime Soon?