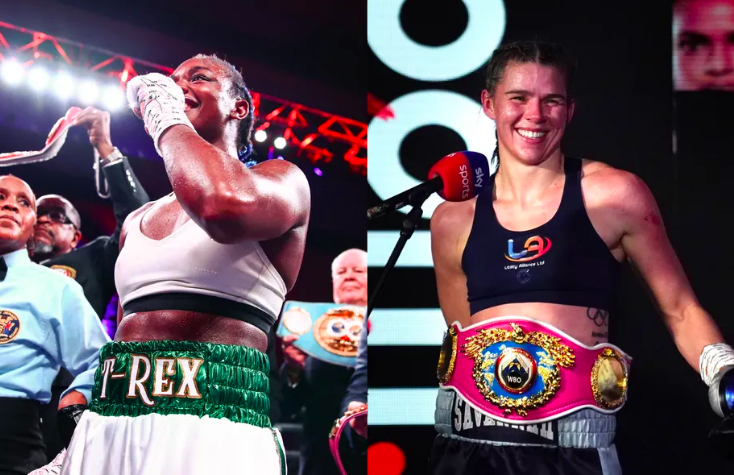 Boxing Odds: Claressa Shields and Savannah Marshall opened as a pick em’ at -112.Savannah Marshall has won 81% of her fights by knockout. The two boxers are ready for a heated rivalry to be settled on September 10.

Another huge women’s boxing bout is on the horizon for this summer. Following up after the Taylor vs Serrano bout on April 30th. Claressa Shields is set to face Savannah Marshall on Sept 10, for the undisputed middleweight championship at the O2 Arena in London. Shields is coming off a clinical win over Ema Kozin and Savannah Marshall was ringside to challenge Shields next.

The opening odds for Claressa Shields vs Savannah Marshall are giving both boxers a 50/50 shot. Currently, you can bet $112 on either fighter to net $100 on the winner of this upcoming bout.

Check out the best boxing betting sites for the latest betting lines as we anticipate Claressa Shields to emerge as the betting favorite as the fight draws nearer.

Betting on Shields vs Marshall

Given Marshall’s impressive knockout ability, betting on the ‘Silent Assassin’ to win by KO against Shields could be an enticing betting opportunity. For Shields, I am expecting another world-class performance with the odds favoring her to win by decision.

I’m saying it now, I’m going to outclass, out punch, out skill and out power @Savmarshall1 ! She gonna get her ass beat. I literally can’t wait! Y’all think she a knock out puncher 😂 alright. Another one will bite the dust

Marshall will be relying on any insights from trainer Peter Fury in the lead-up to the Sheilds fight. “Peter’s changed my life,” she told talkSPORT. “If you’d have seen me three years ago I wouldn’t be doing this.

“I’m quite shy anyway but I was just so in on myself. I’d never believed in myself or anything like that. I couldn’t really tell you anything that he’s done, but you probably know the whole Fury clan and the way that they are – nothing’s impossible. He hasn’t half rubbed off on me.”

Similar to Shields, Marshall is used to being the firm betting favorite. Marshall is set to defend her WBO middleweight title against Femke Hermans on March 12th. A fight that was supposed to happen last year, was delayed due to COVID.

If Marshall can come out of the Hermans fight victories, there will be no doubt that plans to confirm Shields vs Marshall will be finalized. This fight represents the biggest challenge for both boxers so far in their careers.

Savannah Marshall knows she has the upper hand on Sheilds when it comes to finishing her opponents. The main question is around the quality of the boxers she has faced compared to Claressa.

“She can say whatever she wants, I’m a three-time division world champion. She’s a one-time belt holder, only in one weight class, and the reason that this fight is so huge is because of me. Two Olympic gold medals compared to zero is a big deal.”

At the same time, the 26-year-old Shields is not overlooking the task at hand.

“I mean she’s 21-0, 11 knockouts, she’s a worthy opponent and has worked her way to the top, but there’s levels,” Shields said of Kozin.

Who’s your early betting pick, Marshall or Shields? Comment below! In the meantime, don’t forget to check out more of our boxing coverage from around the globe.