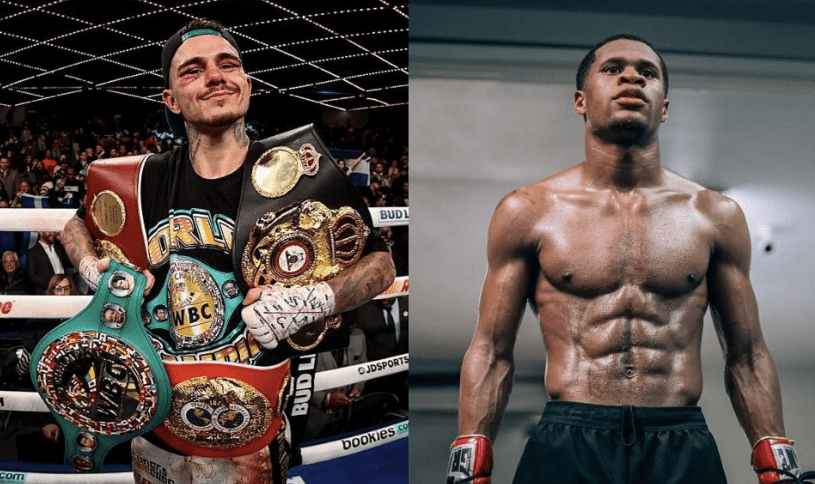 Odds: Devin Haney -170 favorite, George Kambosos +140 underdog.Kambosos is coming off an impressive win over Teofimo Lopez.We review the early odds for betting on Haney vs Kambosos.

Betting odds are live for WBC champion Devin Haney champion who is set to face WBC champ George Kambosos. Both lightweights are coming off big wins and are confirmed to fight on June 5 at Marvel Stadium in Melbourne, Australia. Kambosos wants to remain active and Haney still wants to test himself at the highest level, so this unification bout makes lots of sense right now.

According to the latest Haney vs Kambosos odds via online sportsbooks, Haney opened as the betting favorite. That’s an implied win probability of 62.9% for “The Dream”. Meanwhile, the undefeated Auzzie Kambosos with a record of 20-0, is a +140 underdog, bet $100 to net $140. Haney vs Kambosos betting predictons are live!

Betting on Haney vs Kambosos

After seeing Kambosos handle Teofimo in their Nov 27 bout, it’s hard to not like Kambosos as an underdog once again here. It’s clear that all the rounds Kambosos put in with Pacquiao put in are paying off.

For Devin Haney, he’s managed to up his game for every fight thus far. His style may not be the most fan-friendly but he’s developed a craft that’s composed and Kambosos will need to bring his A-game to defeat “The Dream”.

For Haney, this will be a consecutive straight fight as the betting favorite. This time however the odds will be shorter than his previous opponents. Against ‘JoJo’ Diaz, Haney was a -600 favorite and -800 against Linares by the time the fight rolled around.

The betting line for Kambosos vs Haney is expected to change over the coming months as the fight draws nearer and becomes official. There will be a certain amount of public money going on Kambosos as the underdog here, which could make this fight more of a pick-em’ come fight night.

“It’s a made fight for Haney. The whole shit was a scheme, bro. DAZN, I was on the DAZN platform. They gave it to Kambosos ‘cause they know what I was gonna do with it. They knew what I was gonna do, I was gonna drop (the belts) then it’s a longer process for Devin to become ‘undisputed.’ It’s all a game, man, they pay that shit.”

Loma Next After Haney vs Kambosos

“You’ve got a very interesting situation now where Top Rank is trying to push [Vasily] Lomachenko as the mandatory, but if he [Kambosos] doesn’t fight the undisputed fight [against Haney], I think they will make a fight with Lomachenko,” said Eddie Hearn.

“I don’t think George Kambosos or Devin Haney has any fear of Lomachenko, but I do think they would rather fight Devin Haney in an undisputed fight than fight Lomachenko in a defense [of his WBO 135-lb title].

“So that probably he’s going to fight us, to be honest with you,” Hearn continued about his view that Haney being the more important fight for Kambosos for the undisputed lightweight championship than a title defense against Lomachenko.

“It doesn’t change the fact that they [Team Kambosos] are going to want a huge amount of money for that fight, so they should. It’ll be our job to put that together with either the Australian government or whoever that fight might be staged.

“Part of my reason for being in the Middle East this week is to discuss various side opportunities with various countries, and that could be another one in the mix, but I know George would love to do that in Australia,” Hearn said of a potential Kambosos vs. Haney fight.

Who do you favor between Haney and Kambosos? Comment below!