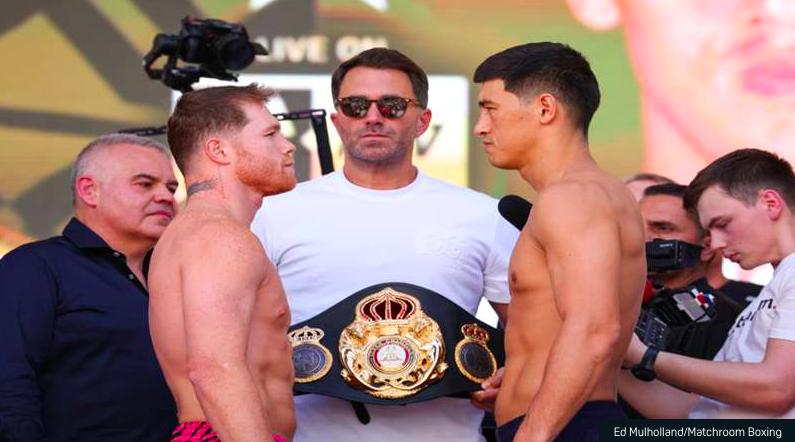 Canelo Alvarez opens as a +160 underdog in a rematch against Dmitry Bivol at middleweight.Bivol who was a +550 underdog in their first fight, pulled off a dominant win over Alvarez.Can Canelo make the right adjustments in this huge rematch at 168 pounds?

Dmitry Bivol put on a dominant performance against Saul “Canelo” Alvarez at the T-Mobile arena in Las Vegas. Scoring 115-113 on the judge’s score cards to hand Canelo his second boxing loss ever, with his only other loss coming by Floyd Mayweather in 2013.

A rematch between Bivol and Canelo is on the cards and it’s set to be for all the marbles at 168 pounds. We review the opening Bivol vs Canelo 2 odds with early analysis on the betting favorite.

The WBA Light Heavyweight champion Dmitry Bivol opened as the favorite to defeat Canelo Alvarez for a second time. As a -200 betting favorite, it gives Bivol a 66.6% win probability for repeating his success again at a lower weight class. Canelo has current odds of +160 for executing revenge in the rematch, bet $100 to net $160. This is the only the second time in his lengthy boxing career that Canelo is the underdog.

Betting on Bivol vs Canelo Rematch

On May 7th Dmitry Bivol did a tremendous job of “upsetting the odds”. Many boxing fans knew Bivol was Canelo’s biggest legitimate threat since Gennady Golobkin. While Canelo’s second run at 175 pounds wasn’t a success it was the first time round over a shook Kovalev, it told us that Bivol is truly a pound-for-pound champion now and Canelo is better suited at 168 pounds.

Canelo’s game plan of attacking Bivol’s lead arm, just like he did against Callum Smith wasn’t near as successful. Another factor that Canelo will have to change for the rematch, is to be less of an aggressor and move his feet more with more accurate counterpunches. He continuously threw heavy shots, which after a while started to lose their pop and gave Bivol the momentum to push threw with way more volume, overwhelming the Mexican.

Bivol’s jab was key throughout the first fight and we can expect a similar approach in the second one. Not only was Bivol able to hurt Canelo at times but he timed the jab perfectly to make him retreat and stop Canelo’s infamous rhythm that usually catches up with his opponents in the later rounds.

Canelo’s right uppercut was a threat at times and so we’re the body’s hots. However, he left the one key component out – his jab. This would have helped Canelo set up more combinations and keep his range better. Instead, Bivol perfectly timed counter punches down the middle that left Canelo frustrated.

Canelo wasn’t able to walk down Bivol as he could against other fighters at middleweight. At 168 pounds, it depends on how the Russian’s weight-cut goes. He would need time to adequately train for a middleweight fight and the odds could be against him as he really steps into Canelo’s den at the lower weight class.

Dmitry Bivol on Canelo Alvarez getting criticised after their fight: “He still has four belts and he is a champion in four weight classes. He’s a great fighter, he’s a legend still. Canelo’s haters are hating now, but he’s still one of the best. I respect him.” [@DAZNBoxing Show]

That all being said, Bivol has gotten the respect he deserves after defeating Canelo. The Russian was a +333 underdog and now he’s a -200 favorite to defeat Canelo for the second time. I do like Canelo’s chances better at 168 pounds, however, stylistically it’s a bad match-up for the undisputed Mexican champion.

In his post-fight press conference, Canelo that he didn’t feel completely comfortable fighting at 175. He speculated that this might be why he was fatigued following the fight.

It will be under Canelo’s terms only that the rematch can be exercised and 168 pounds seems to be the only way it happens.

“I just want to make sure I can be treated like a champion now,” Bivol said.

Bivol said he would be open to a rematch after the first fight, but he hinted that he would want to renegotiate the terms of the contract for the second fight.

Canelo vs GGG 3 Up in The Air

Prior to the showdown, much of the discussion revolved around all things except the fight, including a potential trilogy against GGG. The return of the Mexican hero to the Las Vegas on Cinco de Mayo weekend was in the limelight, with Bivol being treated as just another opponent.

The date of their third Golovkin fight was set to occur on September 17, the day after Mexican Independence Day. Eddie Hearn the manager openly spoke about the fight all week. Gennady Golovkin opted not to travel to Las Vegas. By doing so, his team members avoided lots of confusion.

No need for a rematch.
We have our answers.

Some stats from Canelo vs GGG’s two fights boasts 2,700 punches thrown with over 800 landed, with Alvarez holding a statistical advantage—albeit a slight one, 32.9 percent to 28.6—across 72 minutes.

The fans seem to want to see Canelo take on a 40-year-old GGG. They put on a strong performance in his last win over Ryan Murata in Japan. For legacy, if the promoters can make this fight happen this year, they should book it!

Bivol and Beterbiev Could Happen by 2023

Outside of a rematch against Canelo, Bivol has options to try to unify the titles at 175 pounds. Artur Beterbiev has only one of the other belts in the division. Joe Smith Jr. has the fourth. They are scheduled to fight in June. Bivol could fight the winner of the division for what to unify the division.

The new generation of light heavyweights are truly here and Bivol is making his case to become one the greatest to do it. Who do you think will have their hand raised in the rematch Bivol or Canelo? Comment below.