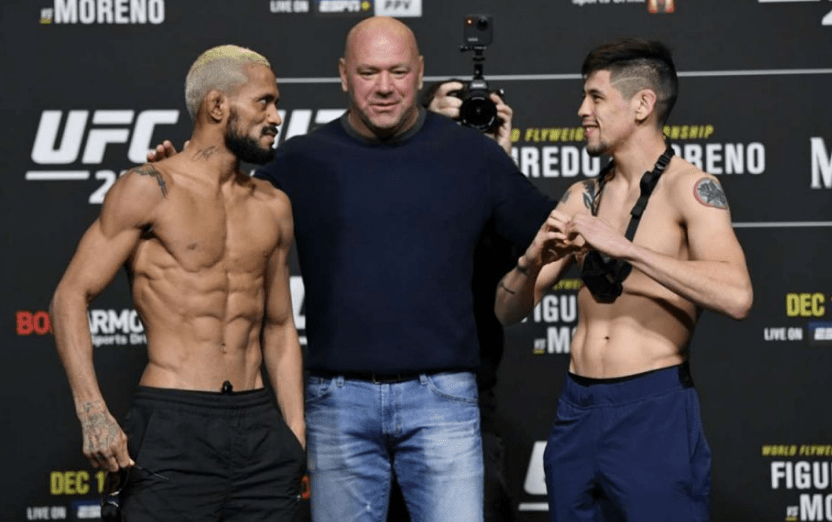 Deiveson Figueiredo is set to take on Brandon Moreno for a fourth time on Mexican soil. The two flyweights have already had three classic bouts, therefore making a fourth seems like a no-brainer for the UFC brass. We review the opening Figueiredo vs Moreno 4 odds with an early betting analysis at the betting favorite for what should be yet another war for the flyweight title.

The current flyweight champion Deiveson Figueiredo opened as the betting underdog +105 to defeat Brandon Moreno for the second time this summer. (Bet $100, Net $105 on Figueiredo winning).

Moreno put up a brave display at UFC 270 but came up short in their third bout to lose his title to Figueiredo. For the fourth and possibly final bout, Moreno is a -125 favorite to defeat Figueiredo. (Bet $125, Net $100 on Moreno winning).

Betting on Figueiredo vs Moreno 4

Figueiredo and Moreno first shared the octagon together at UFC 256 towards the end of 2020. The odds for their first bout were heavily in favor of Figueiredo, who had demolished his way to the top of the 125-pound division.

It turned out to be a five-round war that had fans on their feet, the result was a draw that set up the immediate rematch. Figueiredo vs Moreno 2 went down at UFC 263, where Moreno put on a clinical display and submitted Figueiredo to claim the 125-pound strap. Once again Moreno was the betting underdog for the rematch, averaging around +200 on most online sportsbooks.

Official stats for Moreno vs. Figueiredo. Moreno did land more strikes, BUT Figgy had 3 knockdowns. In a very close fight otherwise, it appears those knockdowns were the difference. #UFC270 pic.twitter.com/QMj6VOCl4D

Out of the three fights so far, the third bout was the closest of all three I believe even more so than the first bout which I had Moreno winning. For Moreno to enter the fourth fight as the betting favorite tells us that the oddsmakers are finally warming up to the fan-friendly Mexican.

At 34 years of age could we see signs of Figueiredo slowing down in their next bout? The addition of Henry Cejudo certainly made an improvement to Figgys game-plan. However, I see Moreno finding more moments to shine if he chooses to not get into a back and forth war.

BISPING: Figueiredo vs Moreno UFC flyweight title FIGHT No.4 MUST HAPPEN next!

Currently, the only major UFC fight scheduled for next month in the International Fight Week pay-per-view card on July 2 with UFC 276. The only reservation for that card at this time is a women’s flyweight battle between former bantamweight champion Miesha Tate and former title contender Lauren Murphy.

Deiveson Figueiredo vs. Moreno part 4 in July? Gotta be during International Fight Week 2022. Anaheim already got their chance to host. It’s Las Vegas’ turn and Brandon lives here. The draw at UFC 256 in 2020 was inside the Apex with no fans. #UFC276

Online sports betting is set to launch officially this April in Ontario, Canada. With commercial sportsbooks such as a BetMGM Sportsbook making their way to become a staple among the best Ontario sports betting apps. This means you’ll finally be able to parlay your MMA wagers for all the biggest UFC events.