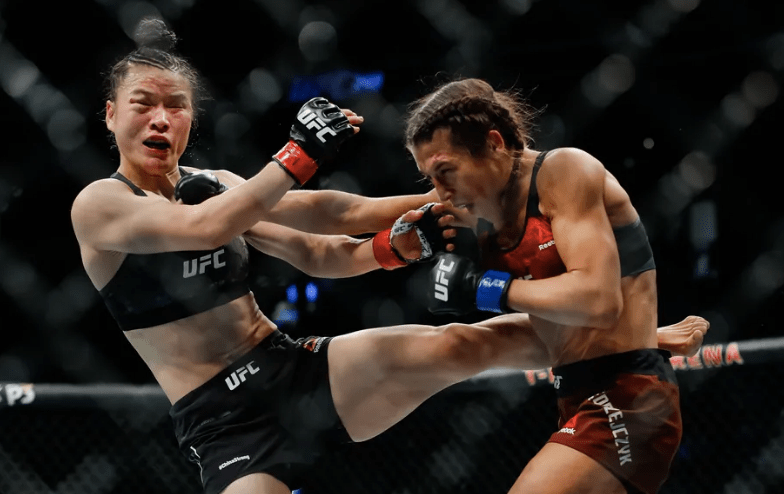 Weili Zhang -175 favorite vs Joanna Jedrzejczyk +146 underdog.Jedrzejczyk has been inactive since their first fight at UFC 248.The Zhang vs Joanna rematch is set for UFC 275 on June 11 in Singapore.

One of the best UFC fights in recent history was Jedrzejczyk vs Zhang at UFC 248 back in 2020. Fast forward two years from then, the two strawweights are set to clash again for a #1 contender spot at UFC 275. We review the opening UFC 275 odds for Joanna vs Zhang below.

According to BetMGM Sportsbook, Weili Zhang is a -175 betting favorite to defeat Joanna Jedrzejczyk in the rematch at UFC 275. That’s an implied win probability of 63.6% for Zhang, whose only two losses come from Rose Namajunas.

As for Jedrzejczyk, this will be her return to the Octagon since her loss to Zhang in 2020. It’s no surprise, that Joanna is the underdog here due to her inactivity. Currently, she is listed at +145 from UFC online sportsbooks. Meaning a $100 wager on Joanna as an underdog could net you $145 at UFC 275.

Arguably the greatest fight in women’s MMA history is going to be run back.

Zhang Weili vs. Joanna Jedrzejczyk has been verbally agreed for UFC 275 on June 11 in Singapore, UFC chief business officer Hunter Campbell told ESPN. Bout agreements will be sent out shortly.

Betting on Zhang vs Joanna at UFC 275

Jedrzejczyk was the strawweight queen up until 2017, then she lost back-to-back fights against Rose Namajunas. Picked up wins over Tecia Torres and Michelle Waterson but lost to Valentina Shevchenko and her last fight to Zhang.

In their first fight, Zhang earned a split decision win to retain the UFC strawweight title after a back-and-forth war with Jedrzejczyk. Zhang opened as a -175 favorite, exactly what she is for the rematch. That betting line moved closer to -235 by the time they shared the Octagon at UFC 248.

Below are the fight stats for UFC 248, overall Zhang had more output but Joanna actually landed 11% more significant strikes. What could have made the difference here was the one successful takedown showing more control in the fight.

If this fight happened immediately after the first fight, then I’d expect the odds to be much closer. In fact, I expect Zhang to become an even firmer favorite for UFC 275. Although she hasn’t won since fighting Joanna last, she did get KO’d by Rose and then went a solid five rounds, to just edge out a split decision loss to “Thug Rose” at UFC 268.

This fight will come down to how sharp Joanna is, after all, that time off. If she is well-prepared then there is no reason why we don’t see another incredibly display and close fight at UFC 275. Stay tuned to BettingInsiderJournal.com for more updates and predictions as this fight draws nearer.

Headlining UFC 275 is Glover Teixeira vs Jiri Prochazka odds are already live. The co-main is expected to be women’s flyweight champion Valentina Shevchenko is expected to defend her title. Challenging ‘Bullet’ is the #4 ranked flyweight contender, Taila Santos.

Another solid fight for the main card is Robert Whittaker who’s back on the trail to UFC gold as he takes on contender Marvin Vettori, you can check out the latest Whittaker vs Vettori odds here.