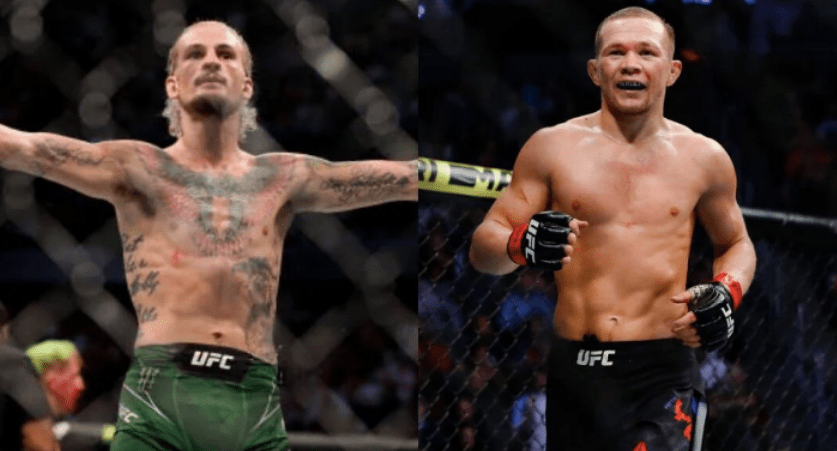 UFC 280 odds have Petr Yan as a -390 favorite over Sean O’ Malley +310 underdog.I break down this technical match-up with an early betting prediction for Yan and O’Malley at UFC 280

At UFC 280, “Sugar” Sean O’ Malley will make a massive leap in competition as he takes on former champion and no.1 ranked bantamweight fighter Petr “No Mercy” Yan.

Yan & O ‘Malley now join a stacked UFC 280 card on October 22 scheduled to take place at Etihad Arena in Abu Dhabi. Headlined by Charles Oliveira vs Islam Makhachev for the vacant lightweight title. We review the latest UFC odds for Yan vs O’Malley with an early betting prediction to follow.

Petr Yan opened as a sizeable betting favorite -390 to defeat Sean O’Malley +310 at UFC 280, as per BetMGM. O’Malley sits outside the top-ten bantamweights at No.13, but has faced ranked opponents in the past such as Marlon Vera and more recently Pedro Munhoz. The current betting line on O’Malley would mean a $100 wager could net $310 on the chance of “Sugar” defeating Yan.

Check out this top-rated sports betting apps. Perfect for tracking line movement and unlocking the latest UFC betting promos, prior to watching UFC 280.

While Yan vs O ‘Malley has been rumbling for some time on social media. It came as a surprise to many when the fight was announced. As its rare for the UFC to put a fighter who’s coming off a title shot against another fighter that’s ranked outside of the top-ten. This speaks volumes to O’Malley’s star power and if he can pull off a win here it will project modern day McGregor vibes.

This is a win-win situation for Sean, who 27 years of age and 2-3 years away from his prime. After losing to Marlon Vera, which was the result of an injury. O’Malley bounced back with three finishes in a row over Thomas Almeida, Kris Moutinho and Raulian Paiva. This then led to O’Malleys recent fight against no.9 ranked fighter Pedro Munhoz. O’Malley was getting the better of Munhoz, but the fight was stopped due to an accidental eye poke.

That all being said, lets not forgot how much of a beast Petr Yan is. “No Mercy” truly lives up to his moniker. He is one of the best boxers in the UFC with lethal kicks and real wrestling ability. Yan’s UFC rise seen him pick up impressive wins over John Dodson, Jimmie Rivera, Urijah Faber and stopped Jose Aldo in the fifth round to win the vacant bantamweight title at UFC 251.

Yan has been a consistent betting favorite among online sportsbooks throughout his UFC run. He was a -145 favorite against Aljo Sterling in their first fight, then after his dominant performance which ultimately ended being a DQ, after Yan delivered an illegal knee.

Yan didn’t wait around for an immediate rematch and instead took on another boogyman of the 134-pound division, Cory Sandhagen. “The sandman” was put under immense pressure from start to finish and this is the fight that O’Malley should be watching to understand the timing and distance that’s required to stand and trade with Yan. Ultimately Yan won that fight against Sandhangen and rematched Sterling a fight that was razor close but ended up losing by split decision.

Clearly this is a huge test for O’Malley, certain aspects of his MMA defesne such as grappling could be tested by Yan. When it comes to striking Yan loves to let his hands go and mixes that up with body and head kicks. O’Malley has more power and manages distance better, with less volume but since this fight is 3-rounds it could work to his advantage. Yan is used to being in championship level fights, this time he will need to pick-up the pace sooner.

Overall O’Malley has a fantastic opportunity here of winning by finish, due to Yan’s traditional fighting style. Which suits O’Malley straight right down the middle. That’s why I disagree with the odds of him being such a major underdog. However, Yan does have more ways to win this fight and can mix up his striking and grappling more than ever to win a close decision.

The Suga Show Believes The Hype

It’s been an exhilarating ride so far for Sean O’Malley. In a recent interview on on ESPN’s DC & RC, O’Malley said “I’m so excited for this. I almost can’t even believe it’s real, it’s happening,”

“He’s obviously the No. 1 contender right now. He’s pretty much 1-1 against ‘Aljo’ [Aljamain Sterling]. He whooped Aljo the first fight, then he got kind of whooped up in the second fight. But he could be considered the champion. The whole top 5, really — the way Petr beat Jose Aldo was one of my favorite performances of Petr Yan. So going in there and stepping up against a guy like Petr is exciting, it’s motivating, and it’s the biggest fight in the bantamweight division right now. I think it’s bigger than Aljo vs. T.J. [Dillashaw].”