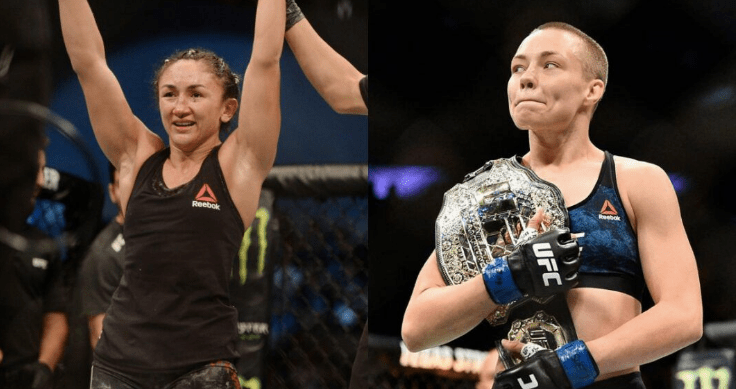 UFC 274 Odds: Rose Namajunas opened as the favorite over Carla Esparza for their upcoming rematch.Esparza defeated Rose in 2014 by rear naked choke at The Ultimate Fighter 20 Finale.We give our fight prediction for Namajunas vs Esparza below.

Rose Namajunas second reign as UFC strawweight champion will contimue at UFC 274. After defeating Zhang Weili for the 115-pound strap and defending it against her in the rematch.

Carla Esparza is next in line to get a crack on the title she once held as the inaugural straweeight champion when the division first launched in 2014. Now the title has come full circle and review the latest betting odds and give a prediction for Rose vs Esparza below.

Rose Namajunas is currently a -190 favorite at UFC 274 to defend her strawweight championship against Carla Esparza. That’s an implied win probability of 65.5% for “Thug” to make her second title defence, on her second UFC championship reign.

The underdog here Esparza holds a win over the champ from back in 2014. Esparza is currently +155, meaning a $100 wager would profit $155 for the “Cookie Monster” to defeat Rose a second time. You can check out the current UFC 275 odds on BetMGM Sportsbook now.

All the UFC betting sites we’ve monitored are giving Rose the slight edge here, with early public money trickling in on “Thug”, who we can expect to be a -250 favorite come UFC 274.

Namajunas vs Esparza Prediction for UFC 274

For Esparza it’s been a long road back to title contention, after losing her title to Joanna Jędrzejczyk back in 2015. Since then Esparza battled the best of the 115-pound division, in that stretch “Cookie Monster” picked up 9 UFC wins and 3 losses.

Espazra is usually overlooked by the oddsmakers, after being the underdog in her past two fights +155 to Yan Xiaonan and +120 against Marina Rodriguez.

Rose has now cemented her position as the best strawweight in MMA. After defeating Joanna twice and while losing the best to Jessica Andrade by getting slammed. “Thug” Rose bounced back and put on a very Rose like clinic on Andrade in the rematch.

After her lost TKO win over Yan Xiaonan, Esparza called for a title shot of Dana, which fell on deaf ears immediately. Now with Rose looking for a dance partner, this rematch fits perfectly with both of their schedules.

Much has changed since their first encounter, with Rose becoming the more proficient striker and finding a way to to nullify the best fighters in her divison. Similarly Esparze has had her success, just on a more slow burn back to contention with less flashy victories.

The UFC stats show us Rose has a clear striking advantage, when it comes to output she lands 4.01 significant strikes per minute compared to 2.34 for Carla. While, Carla does have a slight 2% strike accuracy advantage.

Esparza is much more of ground dominant fighter and lands 3.53 takedowns with a takedown accuracy of 37%. In their first fight Esparza landed 5 of 7 takedowns in total, in the rematch the ground is somewhere Rose will not want to end up, if she does I can expect her urgency to get back up will be there.

I expect Rose to use her improved footwork to her advantage her, coming in light on her feet and landing shots on Esparza and retreating to avoid any takedown attempts. There will be some clinching here and this will be key for both fighters to either land some knees and elbows. There is a chance of an upset here, but as a modest favorite I like the straight-up pick of Rose to win by decision.

Once again Rose Namajunas is added to a stellar UFC card, “Thug” and Esparza are set to rematch in the co-main. While Brazilian 155-champion Charles Oliveira returns to defend his lightweight strap against “The Highlight” Justin Gaethje, we reviewed the latest Oliveira vs Gaethje odds here.

Phoenix is getting a good one y’all. #UFC274 looking nice.

Another solid scrap at lightweight is Tony Ferguson daring to take on the always game Michael Chandler, our preview for Chandler vs Ferguson odds is also live.