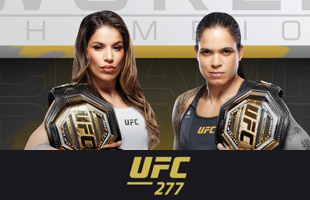 Two belts will be on the line this Saturday night at UFC 277 at the American Airlines Center in Dallas, Texas.

The highly anticipated rematch between Julianna Pena and Amanda Nunes for the UFC women’s bantamweight title will headline the event. In the co-main event, top flyweight contenders Kai Kara-France and Brandon Moreno face off in an interim title bout.

But before we head to the PPV card, the first UFC event in Dallas in four years will be preceded by a prelims undercard filled with veterans and newcomers. Although there aren’t any big names on the list, the prelims look to be as exciting as the main card itself.

Let’s take a look at the prelims undercard bouts for UFC 277 and make our predictions.

Alex Morono is a former Legacy Fighting Championship welterweight champion. The 31-year-old from Houston, Texas joined the UFC in 2016 and began his Octagon career with a 6-4 with one no-contest record. However, Morono went 3-0 last year, defeating Cowboy Cerrone, David Zawada, and Mickey Gall in succession.

Morono has a record of 21-7 with six knockouts and six submission victories. He is 5-11 tall with a reach of 72 inches and fights out of the orthodox stance.

Matthew Semelsberger is a veteran of Shogun Fights who also appeared in promotions like Strike Off, Maverick MMA, Art of War Cage Fighting, and CFFC. He joined the UFC in 2020 and is 4-1 under the promotion. Semelsberger heads to this bout with back-to-back wins. He defeated A.J. Fletcher via unanimous decision at UFC Vegas 50 last March 12th.

He owns a record of 10-3 with six knockouts and one win via submission. Semelsberger stands 6-1 tall with a reach of 75 inches and is a switch hitter.

Morono’s skills do not work for most fighters. He likes to brawl on his feet and does not have the wrestling to compliment his Brazilian Jiu-Jitsu game. However, it has worked for him in the past, though I don’t think it will in this particular fight.

With the Brazilian unable to capitalize on the mat, Morono will be lured into a stand-up battle where he will come up short. In between one of Morono’s wide swings, Semelsberger should be able to land one massive punch that puts this fight away.

Drew Dober is a veteran of VFC, Titan FC, Bellator, and Centurion Fights before joining The Ultimate Fighter 15 where he lost in the opening round. He joined the UFC one year later, stepping in for Sergio Moraes at the TUF 18 Finale. After struggling with a 3-4 with one no-contest record, he has won seven out of his last 10 bouts and is coming off a win over Terrance McKinney at UFC Vegas 50.

Dober is 24-11 with 11 knockouts and six submission wins. He stands 5-8 tall with a reach of 70 inches and is a southpaw fighter.

Rafael Alves is a former Titan FC 155-pound champion. The 31-year-old Brazilian earned his spot in the UFC by defeating Alejandro Flores at the Contender Series, Season 4 in 2020. Alves has nine total first round finishes and heads to this bout having won six out of his last seven bouts.

Facing Alves is like walking through a minefield. You take one wrong step and it all blows up. Alves doesn’t have the finesse of a striking game that leads to a knockout punch. Nor does he have the elite wrestling to set up a submission hold. However, all he needs is one wrong move from his opponent to produce a stoppage.

However, Dober has the experience not to fall into the Alves trap. He is easily the better-skilled fighter on the feet and is a striker that is very tough to finish. With Dober’s smarts and style, Alves’ opportunities in this bout will be few and he should have a hard time taking advantage of those few chances.

I’m not expecting Dober to produce a stunning finish here. However, he should be patient, methodical, but victorious. Dober outboxes Alves and racks up the points to pick up the unanimous decision win.

Don’Tale Mayes is a former Hoosier Fight Club heavyweight champion who also fought under VFC, V3 Fights, and RFA. Mayes made three appearances at the Contender Series and posted a 2-1 record in the competition. His most recent bout there resulted in a first round TKO win over Ricardo Presel which earned him a UFC contract. Mayes lost his first two UFC bouts to Cyril Gane and Rodrigo Nascimento but has since two in a row, including a TKO win over Josh Parisian in his last bout.

Mayes is 9-4 with five knockouts and one submission win. He is 6-6 tall with a reach of 81 inches and fights out of the orthodox stance.

Hamdy Abdelwahab is the first Egyptian to fight in the UFC. The 29-year-old represented Egypt in the Greco-Roman competition at the 2016 Olympics. He is a veteran of the Gamebred Fighting Championship and iKon Fighting Championship. Abdelwahab has a perfect record of 5-0 with all five wins via KO or TKO, including three which have ended in less than a minute. However, Abdelwahab’s five opponents were a combined 9-10 before he fought them.

He is a southpaw fighter who stands 6-2 tall with an undisclosed reach. Abdelwahab is coming off a 27-second knockout of Matthew Strickland at iKon FC 3 last June 3rd.

Abdelwahab took this fight on less than two weeks’ notice, replacing Justin Tafa. He also has only five bouts on his resume. While Abelwahab’s Greco-roman wrestling would help him here, it may be too raw against this particular opponent. His stand-up game is limited and he has not faced elite competition in his short time as a pro MMA fighter.

Meanwhile, Mayes is no world-beater, not by any means. However, as far as experience and level of opposition are concerned, Mayes is way too much better than Abdelwahab. I’m not saying that Abdelwaheb cannot beat Mayes. If both had the same amount of experience fighting inside a cage, maybe Abdelwahab beats Mayes. But right now, that’s not the case.

Mayes has struggled with grapplers before. but I don’t think he will with this newcomer. Not only is Abdelwahab new to the promotion but he looks new to the fight game.

Drakkar Klose is a former Rage in the Cage lightweight champion. The 34-year-old from South Haven, Michigan also fought under Resurrection Fighting Alliance and World Fighting Federation before joining the UFC in 2017. Klose has posted an impressive 6-2 UFC record and is coming off a TKO win over Brandon Jenkins in a Performance of the Night-winning effort at UFC Vegas 51 last April 16th.

He has a record of 12-2 with five knockouts. Klose is an orthodox fighter who stands 5-9 tall with a reach of 70 inches.

Rafa Garcia is a former Combate Americas lightweight champion. The 27-year-old from Brawley, California also appeared for Warrior Fighting Championship and Extreme Full Contact. He joined the UFC in 2021 and after dropping his first two assignments against Nasrat Haqparast and Chris Gruetzemacher, Garcia has won back-to-back bouts against Nathan Levy and Jesse Ronson.

He owns a record of 14-2 with one knockout and eight submission wins. Garcia stands 5-7 tall with a reach of 70 inches while fighting out of the orthodox stance.

Garcia is a live dog here. He is tough enough to hold his own against Klose in a stand-up battle. He is also a good takedown artist and takedowns have given Klose problems in the past. Having said those, I would not be surprised if Garcia pulls off the upset here.

However, if you can recall, Klose was preparing to fight a much tougher opponent in Carlos Diego Ferreira so Garcia shouldn’t give him too much trouble. Not to disrespect Garcia but Ferreira would have given Klose much trouble.

Again, there’s a chance that Garcia grinds his way to victory here. But between that and Klose sprawling and brawling to victory, I think the latter has a much better chance of happening.

Ji Yeon Kim is a former Jewels and Gladiator women’s bantamweight champion. The 32-year-old from Incheon, South Korea also fought under Kunlun Fight and Top FC before joining the UFC in 2017. Kim went 3-2 in her first five UFC bouts but has lost her last three assignments, all via decision with two that earned Fight of the Night honors.

Kim is 9-5 with two knockouts and three submission wins. She is 5-7 tall with a 72-inch reach and is an orthodox fighter.

The Panamanian has a record of 11-4 with 5 knockouts and three submission wins. She stands 5-8 tall with a reach of 70 inches while fighting out of the orthodox stance.

Edwards has the advantage in height but Kim owns a two-inch reach advantage. Both fighters like to put up a high output but neither has that stunning stopping power to end the fight in an instant. More often than not, both like to go the distance and figure in close fights, win or lose.

Kim has held her own against a top-notch striker like Alexa Grasso in the past. I think she can match or even surpass Edwards’ volume in this matchup. She also has better power which should neutralize Edwards’ flurry of punches and help sway the judges.

I won’t be surprised if Edwards lands more punches. However, Kim should be able to connect on the harder ones, the ones that will be noticed by the judges. In a close bout that could end in well, a split decision, Kim’s slight power will be given more props than Edwards’ volume.

Mathetha is 3-1 with one KO and one submission victory. He stands 5-11 tall with a reach of 76 inches and is a switch-hitter.

Orion Cosce is a veteran of OFP-Warrior Games, Bear River FC, and URCC. The 28-year-old from Arcata, California joined the Contender Series in 2020 and knocked out Matt Dixson to earn a UFC contract. Cosce lost to Philip Rowe at UFC on ESPN 8 in his UFC debut.

He is 7-1 with six knockouts and one submission victory. Cosce is a switch-hitter who is 5-11 tall with a reach of 71 inches.

Mathetha holds a significant edge on the feet and has a massive five-inch advantage that he can use to paw away from Cosce and win this fight on points. However, we’ve seen him struggle ( and lose ) to imposing sluggers with a solid striking game.

Cosce does not have the BJJ skills to pull off a slick submission win here. However, that will not stop Cosce from mauling Mathehta after taking him down. So unless Mathetha catches Cosce clean with a big punch early in the fight, I think Cosce will get stronger as the fight progresses.

For as long as Cosce continues to move forward and be aggressive with his takedowns, he should be able to force Mathehta out of his game plan. Whether he pounds him out from the top position or beats him up against the fence, I think Cosce will use brute force to beat Mathetha.