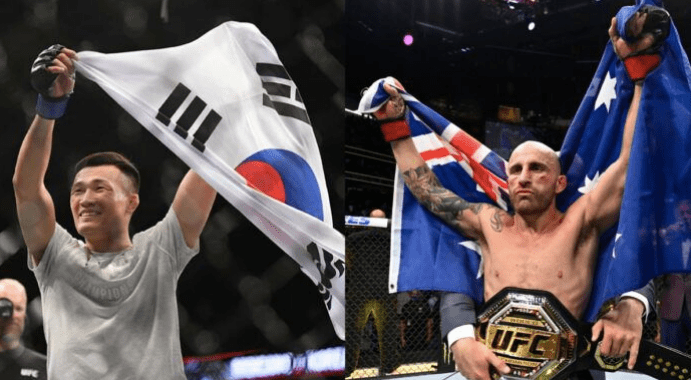 At UFC 273 Alexander Volkanovski will have a fresh opponent after battling Max Holoway back to back from 2019 to 2020. Then going five full hard rounds against Brian Ortega in September 2021. Volkanovski was set to face a third time, but “Blessed” had to pull out due to an injury, that’s where Chan Sung Jung stepped up to take on the (23-1) featherweight champ at UFC 273.

Back at the beginning of the year, Volkanovski was opened at -450, while the Jung was less of an underdog at +333. Clearly, the UFC public money has been heavily wagered on Volkanovski to remain the 145-pound champion, with Jung’s patchy record still making him a fan favorite and a risky one as a +525 underdog for UFC 273.

Alexander Volkanovski holds several wins over arguably the greatest featherweight of all time, Max Holloway, the last being an epic 15-minute slugfest. He has steadily climbed the GOAT ladder and is currently pursuing the esteemed title. Currently, it’s a toss-up between a prime Jose Aldo and Holloway, but Volkanovski’s dominance can’t be snuffed at especially if pulls off a statement win over The Korean Zombie.

Some stats for yo ass

I expect Volkanovski’s well-rounded skills to cause Jung some problems no matter where the fight goes, especially in wrestling. He’s able to generate huge power that could pin Jung against the fence and holds excellent takedown defense.

One area that Volkanovski will have to watch out for is Jung’s ability to change the pace and rhythm of a fight. This is where Jung could have his moments of success, in countering Volkanovski and landing some unorthodox elbows and looping shots.

Volkanovski lands on average 2.35 more significant strikes per minute than The Korean Zombie. If it’s a pure numbers game this could add up, especially if Jung absorbs the majority of these shots.

When it comes to takedown defense Jung is highly underrated, with a 77% takedown defense. Volkanovski lands 1.77 takedowns on average per 15-minutes, not a huge amount but something Jung will need to be prepared for. What makes Volkanovski excel at 145-pounds is his ability to walk an opponent down and land heavy leg kicks while still maintaining decent striking defense and looking for chances to wear his opponents down.

In the end, Volkanovski is the guy you wish to finish with to defeat. We saw Max Holloway beat him by fighting all the way to the last round. Even after getting dropped in the first two and subsequently three rounds, he came back to win rounds three, four, and five. The Australian has relentless pressure, even after being knocked down in the first and second rounds.

Current champion Aljamain Sterling takes on Petr Yan for the co-main event bantamweight title. They faced one another previously, with Sterling winning by disqualification. Yan is the current interim champion. We have the latest Sterling vs Yan 2 predictions ready to go.

Rounding off the main card and for some might be the most anticipated one. Is the return of Khamzat Chimaev. With odds heavily in favor of Chimaev defeating Gilbert Burns at UFC 273.